Road 2 Recovery Foundation is a non-governmental organization that is structured to assist and educate more about prevention, treatment, rehabilitation, recovery techniques for people living with Stroke, Arthritis, Pains, Cancer and Overweight/Obesity with their care givers. 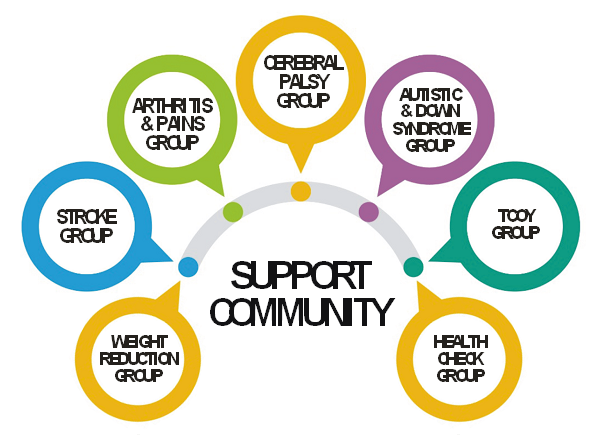 We stand alongside survivors and their families, healthcare professionals and researchers. We build community awareness and foster new thinking and innovative treatments.

Our support community was established 3rd of March 2015. A support group that provides an opportunity for people to share personal experiences and feelings, coping strategies, or firsthand information about diseases or treatments.

The common experience among members of these support groups means that they have similar feelings, worries, everyday problems, treatment decisions, etc.

Our members act as a role models for each other. Seeing others who are contending with the same adversity and making progress in their lives is inspiring and encouraging.

Road to recovery support community is a platform that provides individuals with the tools they need to improve their quality of life through rehabilitation. We provide our members (survivors) with 2-3 months free rehabilitation, vital recovery information and a platform to share their personal experience during recovery process.

Whether you are a survivor of stroke, pain and arthritis, our community help people connect, learn, and create a sense of purpose and meaning in their lives. Our tools are built from experience, research, and a desire to help make sure no one feels isolated.
Our support community will help you understand what care and support options are available to you on the road to recovery.

Rehabilitation helps restore normal body function and movement in cases of injury, illness, and disability. Through re-learning and re-training programs, our patients aim to achieve their maximum strength and function, to reach their individual goals. Our teams are skilled health practitioners that focus their assessments and treatments on the musculoskeletal, neurological and cardiovascular systems.

During rehabilitation many survivors continue to improve over a long period of time, sometimes over a number of years. This means learning new skills or relearning old ones which may involve adapting to new limitations, finding new social, emotional, and practical support to live your life to its best. We believe recovery is a possibility by taking an active and positive approach.

Utilizing a variety of techniques and treatment methods that can help to:

Treatments may include manual therapies, mobilizations, stretches, pain relieving modalities, balance training, active conditioning, education and home based exercise instruction.
During your rehabilitation we individually tailor and gradually graduate your program into short and long term goals. The short term goal is to achieve and maximize your independence in pursuit of your long term goal of total recovery.

Living with Stroke, Arthritis and Pains can make someone feel isolated which results into many physical and psychological challenges that can affect any one. The experience of pain differs from person to person, and there are different ways of feeling and describing pain.

The intensity and disabling effects of these health challenges are highly variable and unpredictable. Among the problems faced by persons with such pain are high costs of treatment, difficulty accessing medications, disruptions in the physical abilities, psychological, social, and economic aspects of their lives.

In their search for relief, survivors often seek care from several sources. It’s hard for any individual to fight the battle alone and it is essential that these patients get the support they need as part of their treatment plan, regardless of where they live or when they need it.

For the past four (4) years we have successfully rehabilitated about 15264 persons including children with these health conditions by improving their quality of life both physically and psychologically. Also we have educated both patients and their care giver on best practices to prevent and promote healthy living.

We have also been creating awareness and educating people on pain management, ergonomics, stroke and arthritis rehabilitation. Also engaging in different platforms including Television programs, radio stations, seminars and conferences at every level to reach people of different socioeconomic background.

From April 6th 2015 to February 13th 2019 we have carried out community outreaches in different communities giving them 2-3months free rehabilitation with positive results and testimonies.

For the past 4 years of independent operation, Road to Recovery Support Community has helped countless patients and caregivers. As we look to the future, our foundation needs your help to reach more people who are in desperate need to live a life free from pains.

Your support will change the lives of survivors by funding vital services and life-saving research. Let’s walk together to bring life changing care to everyone who needs it.

Thousands of people like you help us stand stronger as we try to build a better and mote healthy community. We partly rely on donations to carry out some of our free/subsidized services. Will you give today?

Go to our online Donation page for card donations.